Home/Articles, Communication, Communiqués de Presse, English/Open letter to the bishops of France – On social conduct: a double standard?
Previous Next 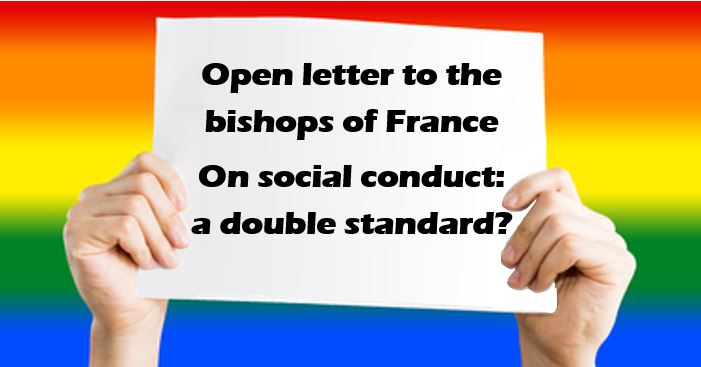 Before the second round of the French presidential election, the Catholic bishops of France, with a few praiseworthy exceptions, refused to adopt a clear stance in favour of either of the two candidates, asking “voters to vote according to their conscience”. In such a grave moment, when the fate of the whole country and the cohesion of Europe were at stake, they did not consider it appropriate to take a position when faced with a political project based on fear, isolation, rejection and hatred of others.

The bishops maintained a dangerous silence while 38 Catholic associations and church movements warned that “extremist theories and their acceptance as commonplace constitute a danger for democracy” (1)! At the same time, other institutionalised religions and numerous Christian, humanitarian and youth organisations called on voters to vote against the National Front.

Shortly afterwards, on the day after Emmanuel Macron was elected, Mgr Pontier, president of the Conference of French Bishops, asked the new president not to “get us stuck in debates about lifestyle which have already caused division in the country” (2). This pronouncement was in continuity with earlier declarations about questions of social conduct such as the access of lesbian and single women to MAP (medically assisted procreation), and the modes of dying for people suffering great pain, etc. This seems to us to be particularly inappropriate and has shocked a great number of progressive Christians.

David & Jonathan, a Christian homosexual movement open to all, wishes to denounce this use of a double standard by the leaders of the Catholic Church in France:

We believe that the avoidance of such fundamental debates is contrary to democracy and does not allow the healing of a deeply divided society, and that on the contrary it breeds fear, distrust and exclusion. We defend the possibility of a humanist dialogue inspired by Christian values such as solicitude, openness, tolerance and respect.

We strongly reassert that it is necessary, concerning questions of social conduct, to heed the life testimonies of the people concerned, rather than make an affirmation based on dogma. In this way, the enlightened conscience of each person can make the final decision… What freedom for the people of God!

(1) « Ne cédons pas à la tentation du repli sur soi » -> link
(2) La Croix, 10 May 2017
(3) The National Board warmly thanks all the members of our association who have contributed directly or indirectly to the framing of this open letter.