Home/Articles, Communication, English/Synod – Contribution from David & Jonathan concerning the preparatory phase of the second Roman synod on the family
Previous Next

David & Jonathan’s local groups and its sympathisers together with some of our members have, within our national project of “relations with religious communities and Churches”, worked through the Lineamenta and its questions that are preparatory documents for the second session of the Roman Synod on the family. This has given rise to various feelings and reflections.

Signs of hope and caution

The intermediate text from the first session of the Synod was, for many of our members, a sign of hope. This document was completely different from the usual official statements from Rome in that it spoke of the “gifts and qualities” that homosexuals could offer to the Christian community. Furthermore, it was also noted that in couples formed of persons of the same sex their “mutual aid” could constitute “a precious support in the life of the partners”.

By abandoning a simply negative conception of homosexuality, the Fathers of the Synod seemed to move away from a discourse of pure condemnation, even if these paragraphs of the intermediate text, through lack of only a few votes, were not retained in the final document of the first session of the Synod. Nevertheless we acknowledged this shift in discourse. “It’s good that our reality was mentioned”, said our co-president and spokesperson at the time. It is always a positive step to set out from lived realities rather than from a priori principles. Given the strength of the conservative forces at work in Catholicism, this document remains a model for what we can realistically hope to obtain to-day from Rome in terms of an “open” position on present-day homosexuality.

However, the final text from the first session expressed only unequivocal condemnation, without moderation or nuance, for gender studies and the possibility of same-sex marriage, while denouncing pressures from an alleged international LGBT lobby group: all this was tiresome, or even dishonest and offensive. Our final impression was one of uneasiness when confronted with the two-faced discourse of the Catholic Church concerning homosexuality. In countries where homosexuality has become just another element of society, and is gradually being recognised and integrated, the Church speaks of welcome and respect. Unfortunately, in many countries where homosexuality can still be criminalised and be the pretext for blatant violations of human rights, the reaction of the institutional Church is either weak or inexistent.

Standing ready for dialogue, with our testimony

In these Lineamenta appear many elements that we have already discussed at the time of the first questionnaire. The very formal language used in the docu 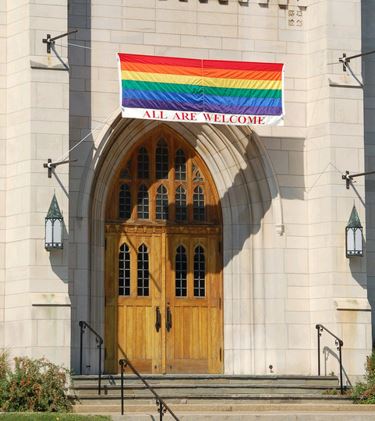 ment and its constant references to other texts of the Magisterium do not make it easy for Christian communities to assimilate, in spite of the call from Pope Francis to do so.

The document’s theoretical approach discourages any openness to life situations or to recent data from Human and Social Sciences, not to mention — why not? — certain recent theological works on the family and sexuality.

Paragraph 55 and question 40 in this preparatory document concern us most closely as they specifically treat the “pastoral attention” towards homosexual persons and their families. In recent times, there must have been a realization among certain Catholic bishops of the invisibility of LGBT’s and some work done to better receive them into communities and movements. Some dioceses in France have, for example, set up teams or reflexion groups that members of David & Jonathan can join on an individual basis.

This is a heartening development, even though it seems difficult to separate pastoral care from the official discourse on human sexuality which many of us see, as it now stands, as incapable of dealing with the complexity of real situations and requiring a complete and urgent revision. Furthermore, in spite of its openness, which is not negligible, the text does not get away from a conception of homosexuality that sees it as a “tragic affliction”. It is presented as a heavy burden, having only a negative effect on LGBT’s and their families. It is never seen as a possible grace or an opportunity for enriching one’s spiritual life, or even one’s social commitment. In this new document, all openness to experiences lived in a positive way has unfortunately been erased.

Our association stands ready, as it has for the last 43 years, to testify to the happy experiences of LGBT people, as well as to the still considerable suffering caused by homophobia, whether it be of religious origin or not. In our activities in schools or in our dialogues with Christian communities, David & Jonathan tries to high-light the stories told by its members, as they share the joy and the pain of life as an LGBT person and its possible link with spirituality. So we remain ready to continue the dialogue and we work towards setting up inclusive and welcoming places for spirituality.

Reflections expressed by others and to be continued

As a member of several networks of associations or in cooperation with other LGBT or liberal Christian groups, our association feels at home with the considerations expressed by others, generally so apt and precise.

Associations that are members of the Fédération des Réseaux du Parvis (FHEDLES, Espérance 54), the Conférence Catholique des Baptisés Francophones, other LGBT Christian organisations such as Réflexion et Partage and the European Forum of LGBT Christian Groups have given interesting analyses or testimonies that enrich our reflections and will enrich (we hope) our future projects.

Our hope is that this “synodality”, that doesn’t necessarily follow the paths laid out in advance by the Institution, will have some echo in Rome between now and this autumn. In any case, we remain vigilant concerning the coming events and we are waiting, in confidence and hope, for the sky to clear for our homosexual sisters and brothers throughout the world, in particular, for those who have to face homophobic violence.

About the Author: D&J Communication